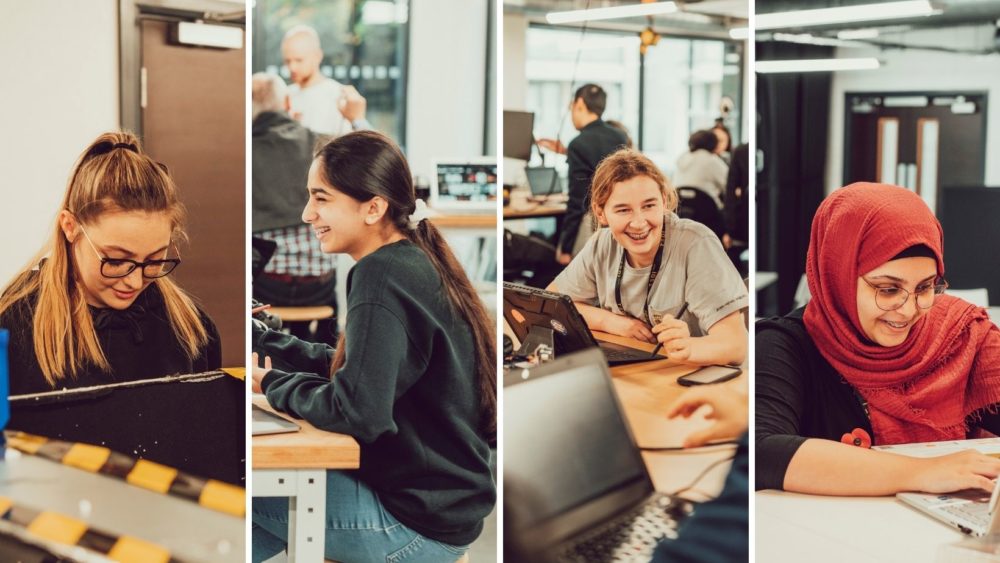 You may or may not have heard about the gender gap within engineering and other STEM industries. This is a problem that needs fixing; without more females working on solutions designed to improve society, we run the risk of neglecting the needs, or even safety, of particular members of our global community.

Today is Introduce a Girl to Engineering Day, where we come together as an industry to raise awareness of the gender gap and encourage more girls and young women to go into engineering. Currently, 50% of TEDI-London’s student population is female, so we had the chance to hear from some of our very own up-and-coming female engineers: Elise, Visha, Natasha and Zainab. They shared their experiences on why they decided to pursue a career in engineering and how they think we can encourage more young women and girls to do the same.

How were you first introduced to engineering and what initial impression did it give you?

Elise: My grandad was an engineer and has always talked to me a lot about what he was working on, so I grew up with a fairly good understanding of the kind of projects that engineers undertake. He worked for EasyJet, maintaining and repairing the plane engines and always seemed enthusiastic about his job.

Visha: I’d known for a long time that I wanted to pursue a career in one of the STEM industries because I was good at those subjects and enjoyed them the most, as well as the fact that most of my family members work in various roles across those industries. So when I was in Year 10, I moved to a STEM-focused school where we did a lot of engineering, which I found interesting.

Natasha: I was first introduced very recently when there were sustainable energy engineers working at my family home to make improvements. I spent some time speaking to them about what they were doing and realised that their work allows them to make small but important changes to homes and buildings to make them more sustainable.

Zainab: One of my Year 7 teachers first told me about engineering and encouraged me to find out more about it because of the good career prospects it presents, as well as the fact that there aren’t enough female engineers. From there, I joined a STEM club at school where we took part in lots of mini engineering projects which I really enjoyed. I was particularly engaged with the problem-solving aspect of the challenges, where methods we tried would go wrong and we would have to learn from our mistakes and develop different solutions.

Why did you decide to study engineering?

Elise: I always got a good impression of engineering from speaking to my grandad, and I knew that there are great job prospects, both within his field as well as other engineering disciplines. Following in his footsteps, I studied engineering at GCSE level and really enjoyed it, so decided to carry on at degree level as well.

Visha: Given my interest in STEM subjects, I had thought about either engineering or astrophysics as potential options for further study. When I looked at career prospects though, I realised that engineers tend to have more options and better career prospects, so it seemed like the natural choice for me.

Natasha: I was originally planning to study veterinary medicine, but switched at the last minute to study engineering because I was inspired by the work being carried out at home. Once I had a better understanding of how engineering fits into the bigger picture when it comes to tackling climate change, I wanted to pursue it as a career path to give me more opportunities to help reduce our carbon footprint as a global community.

Zainab: Initially, I wanted to study architecture as I had enjoyed challenges based on designing and building structures at my school STEM club. However, I was put off when I realised that architecture degrees take a long time to complete and I wanted to get into industry more quickly.

How do you think we could introduce more girls to engineering?

Elise: Make it fun! When trying to inspire younger people to consider a career in engineering, they can be introduced to the most engaging aspects, through games, puzzles or even Lego.

Visha: Girls need to understand from a young age that they can do all the same things that boys can do, so I think it is really important to stop children being exposed to gender stereotypes. This would help young people to stop viewing engineering as a ‘subject for boys’.

Natasha: Expose girls to more female role models from industry to show that women can be engineers and work on the same projects as men do. This is tricky because the industry is so male-dominated, but bringing as many female engineers as possible into the spotlight would be really encouraging for girls and help them to believe that they can do it.

Zainab: When I was younger, I was really driven when I took part in a school ‘boys vs. girls’ STEM challenge and was pleased to see that the girls’ team performed just as well as the boys’ team. Encouraging schools to run more activities like this would really help girls become more confident and believe in their abilities.

Are you a creative problem-solver hoping to use these skills in your future career? Find out more about our Global Design Engineering degree to see if it’s for you!